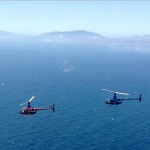 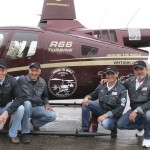 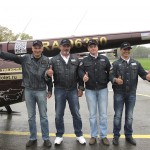 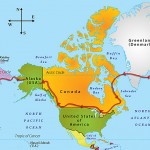 Torrance, CA — On September 15th, a pair of Robinson R66 Turbine helicopters landed at the Bunkovo Heliport, just outside of Moscow, marking the end of a six-week, Around-the-World Expedition. The historical flight was a first for the R66 and for Russia.

The expedition was organized by Aviamarket, a Robinson dealer in Moscow and a flying club whose members own the R66s. Aviamarket was eager to test the R66 as it had just received certification in Russia on March 15th. Michael Farikh, the expedition’s leader, and Alexander Kurylev flew S/N 0323, a blue R66, while Vadim Melnikov and Dmitry Rakitsky, Aviamarket’s chief pilot, flew S/N 0164, a maroon R66.

Their journey began on August 2nd when the four pilots, along with documentary filmmaker Dmitry Kubasov, departed the Bunkovo Heliport. Maintaining a westerly direction, the two helicopters zigzagged across Europe from Norway down to the tip of Africa circling back up to Scotland. From Scotland, they ventured across the vast North Atlantic Ocean, via the Faroe Islands, Iceland and Greenland. Greenland to Newfoundland, Canada marked the longest day of the expedition, 12.5 hours in the air. The helicopters traveled across Canada, flying just north of the U.S border to Vancouver, before setting course for Alaska. After passing through Alaska, they crossed the North Pacific Ocean to Siberia, and finally back to Moscow. All in all, the teams crossed four continents and two oceans, traveled 39,448 kilometers (24,512 miles), and logged 220 flight hours.

Both R66s were outfitted with auxiliary fuel tanks to extend their range. The pilots flew almost 1000 kilometers (620 miles) per day at different altitudes, depending on weather and terrain. Crossing the Atlantic was perhaps the most challenging leg of the trip with long stretches over water, the longest being 787 kilometers (490 miles). Temperatures varied throughout the expedition, ranging from 40C (104F) in parts of Europe down to 1C (34F) over Greenland and northern Canada.

According to pilot Dmitry Rakitsky, the R66s performed exceptionally well from start to finish, demonstrated a high degree of reliability and required only routine maintenance. “We are one hundred percent sure of the quality and reliability of this product,” said Mikhail Yushov, CEO of Aviamarket.

This is Farikh’s and Rakitsky’s second ground breaking flight having made history in April flying an R66 to the North Pole.